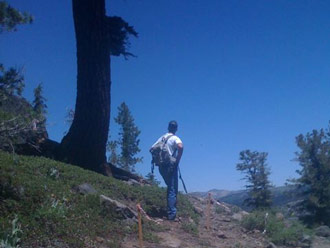 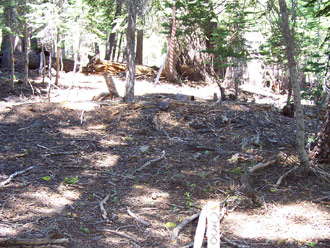 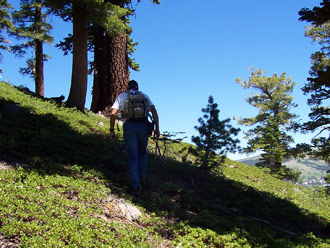 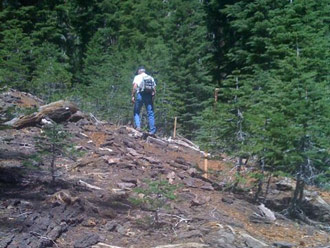 In late May 2009, Forest Service personnel, along with ENFIA volunteers and Kirkwood Homeowner Assoc. Members, walked the area where the new trail was intended to be built. In mid June, 2009 the final layout of the 1/3 mile long trail was flagged and inventoried for the National Forest system trails program by the Trails engineer. Trail building began on July 9th.

Using his Morrison Trailblazer, Don Hayes constructed a 24-36” wide trail and volunteers followed behind him using hand tools to finish out the trail tread. Following detailed trail specifications to prevent tread and resource damage erosion and drainage features were installed and the F.S. Trails engineer monitored all work that was done.

The trail is now in use and it provides recreational opportunities to hikers, mountain bikers and equestrians. Its proximity to Scout organization camps encourages youth to get outdoors and exercise by offering a new trail for them to explore and enjoy without having to travel miles further away.

Drive up Hwy. 88 and take a hike. This is a beautiful part of the Eldorado National Forest and lots of time and effort went into making this a wonderful outdoor adventure for all to appreciate. 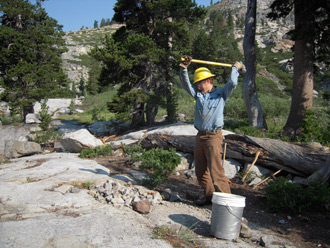 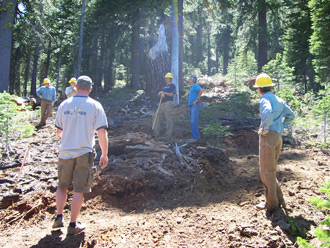 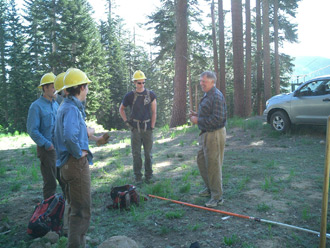 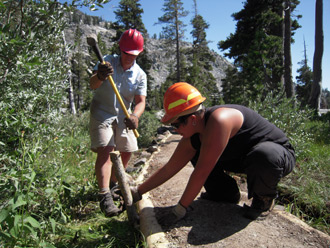 The 2009 project was a continuation of the effort begun in 2008 by our volunteer partner, the Wilderness Volunteers (National organization) working under the supervision of the Eldorado N.F. trails engineer and Pacific Ranger District Wilderness/Trails staff. Trail construction projects in congressionally designated Wilderness areas require the use of primitive tools to protect the wilderness character and resource. Unique and innovative trail construction applications are developed and implemented. Pre-project planning involved the layout and design of the new trail sections, location of native material and locating and safely dropping appropriate lodgepole pine turnpike retainer sections.

100 feet of log turnpike trail section and hardened drainage culverts, constructed in the 1980’s were removed and replaced. The existing turnpike trail sections had eroded and deteriorated and were creating obstructions to slope drainage and runoff thru the meadow/wetland. Trail users were bypassing the muddy sections, creating new crossings, widening and braiding trail sections and accelerating trail tread erosion. Turnpikes elevate a trail above wet ground and create a stable trail base. This technique uses fill material from parallel side ditches and from offsite borrow pits to build up the trail base higher than the water table.

Project crew members removed the existing lodgepole pine retainer log sections and dug out drainage ditches on either side of the planned raised area. Once the retainer sections were limbed and bark removed, they were transported to the trail site by log-carriers. Other crewmembers were involved in locating a borrow pit, a site that has suitable tread material close to the work site, and transporting the fill material to the work site.

In addition, small well-graded angular rocks were quarried and placed inside the retainer sections prior to fill. Existing runnoff/drainage areas were defined and re-established. Existing culverts were repositioned and secured by rock retainers. A rock culvert, with settling basin was constructed at the north-east end of the turnpike, offering project crewmembers a chance to display their considerable trail building skills. A check dam was installed at the end of a 90 ft turnpike that had been constructed the year before.