Round Top Geologic Area | A Journey Through Geologic Time …

Extinct volcanoes and glacially sculpted land are some of the clues to the past that you will encounter on your journey through the Round Top Geologic Area. Dramatic changes to the landscape have occurred here for over two hundred million years. Evidence of these changes is visible from the ten miles of trails leading through the area.

The Round Top Geologic Area includes 4033 acres of Eldorado National Forest land, of which 3156 are in the Mokelumne Wilderness. This special interest area was created by the USDA Forest Service to preserve and interpret its unique Central Sierran features. 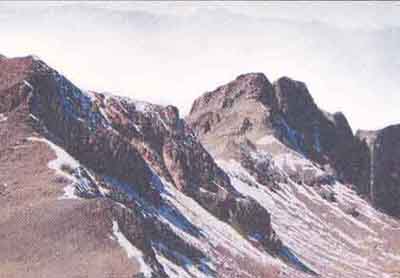 The Round Top Geologic Area is a special place.

Rocks From Deep Inside The Earth

As you walk the trails, take a look at the whit and black peppered rock. This is granodiorite (pronounced gran-o-di-o-rite), the rock which forms the backbone of the Sierra Nevada. It is similar to granite, but contains more dark colored minerals. About one hundred and fifty million years ago, deep below the surface of the earth, magma (molten rock) was pushed up into the older existing rocks. For millions of year, the magma cooled and crystallized into solid rock. Then, about sixty million years ago, the land began to rise, causing the older pre-existing rocks to erode away and thus expose the granodiorite underneath. 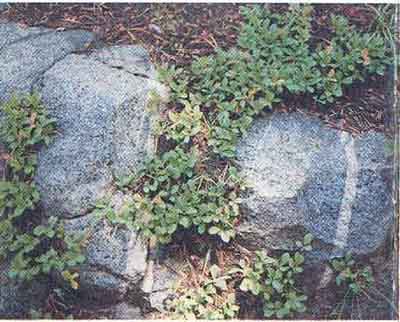 Examples of granodiorite with its characteristic speckled tones abound throughout the area.

This process created the Sierra Nevada range. Since that time, the Sierra has rise approximately eight miles! Wind, rain, and snow steadily eroded down the mountains at about the same rate as they were rising. The mountains are still rising today, at an even faster pace than before. Geologists estimate the rate of uplift is as much as 1.5 inches eve one hundred years.

Once you’re in the geologic area, take a good look around you. Do you see evidence of pa volcanic episodes? Take a closer look at the peaks and ridges. If you guessed that these are old volcanoes or volcanic flows, you are right! Beginning about thirty million years ago, volcanoes erupted here, burying the Sierra under a thick layer of lava, ash, and mudflows. As the land continued to rise, however, much of the volcanic rock was eroded away, leaving only remnants on the highest peaks and ridges. 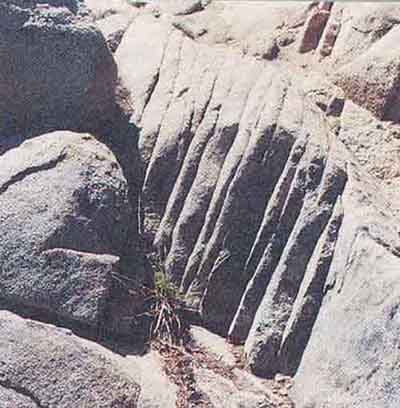 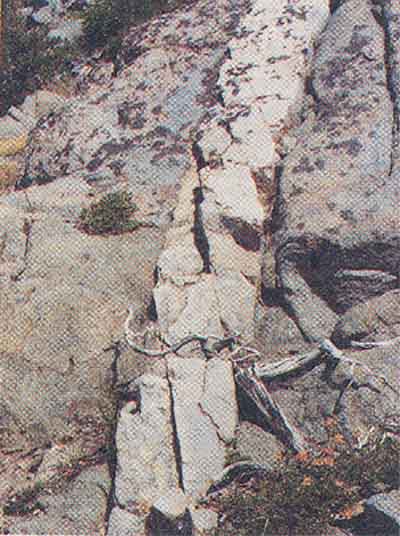 One of many examples of dikes (veins) in the area

The Era of Volcanism Leaves Behind Relics and Gold

Round Top Peak is a relic from this era of volcanism. It’s an old volcanic vent, probably the source of much of the volcanic rock found in the area. Other prominent volcanic features are Elephants Back, an old lava dome (rounded mass of solidified lava), and Black Butte, a vent similar to Round Top Peak.

These joints were also filled in with a quartz-rich rock forming light colored veins or dikes. Evidence of past and present gold mining activity is visible along the trails leading from Woods Lake to Round Top Lake and from Woods Lake to Winnemucca Lake. Mining on National Forest lands has and continues to provide an important source of minerals to meet the needs of our country.

During this period mineralization occurred (a process which deposits valuable minerals into rock). As a result, gold was left behind in joints (cracks) within the granodiorite.

Boulders are Clues to the Ice Age

On the way to Frog Lake or Winnemucca Lake, you’ll notice boulders scattered throughout the area. This is glacial till, a mixture of boulders and soil which the glacier dropped as it receded (melted). Between Woods Lake and Winnemucca Lake, you may notice that the trail follows a broad ridge of bouldery material. This is called a glacial moraine. Think of the glacier as a big bulldozer, pushing tons of rock and soil down the valley. When the glacier receded, it left behind piles of this material along the sides and at the front of the glacier. These piles of rock and soil are the moraines. 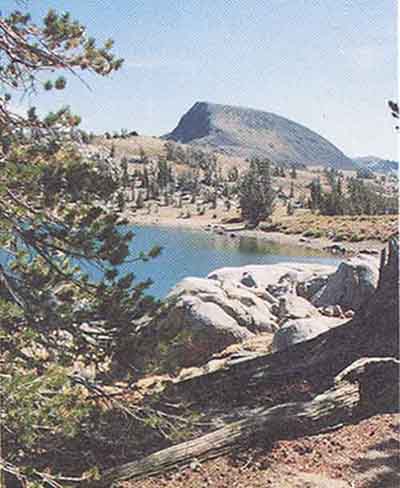 Elephants Back with Forg Lake in the foreground.

The Sierra was glaciated at least three times in the past two million years. Over a very long cold period, snow accumulated and eventually turned into glacial ice. The tremendous weight of the glacier forced it slowly downhill, scouring and carving out the bedrock as it went. Often the glaciers carved out the sides of mountain peaks leaving a deep steep-walled basin. This is known as a cirque (pronounced surk). Round Top Lake and Emigrant Lake are two examples of cirque lakes in the area. The variety of geologic features that can be seen in the Round Top area makes this an excellent educational opportunity. Perhaps the most spectacular aspect of this area is the tremendous views it offers. From nearly anywhere in the geologic area, you can see evidence of the great Sierra-building events: the period of magma injection and cooling, the explosive volcanic episodes and the most recent glaciation.

The Round Top Area is also noted for its unique flora and its impressive display of wildflowers during the summer months.

The Eldorado National Forest has another Geologic Area for your discovery and enjoyment. Experience the dramatic work of glaciers in the Pyramid Geologic Area, 47 miles east of Placerville on Highway 50.

For more information on the geologic history of the Sierra Nevada, stop by the Carson Pass Information Station during the summer months, the Amador Ranger Station in Pioneer, or the Eldorado National Forest Information Center east of Placerville (916) 644-6048.