Autumn in the Sierras has always been a special time and place for me. As long as I can remember, I’ve made a trip to the Sierras one last time in the fall, just to check’ on things to make sure everyone was ready for the winter. 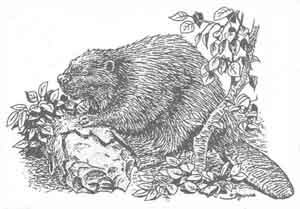 Last October, my wife Bonnie and I had made our last trip to the Sierras just like every other year before. We placed our camp along Highway 88, east of Silver Lake on the north side of the highway where a part of the old road bed is easily accessible. Snow had already fallen and we were anticipating some outstanding photographs. The aspens were on fire with bright yellow leaves and the tops were just beginning to turn bright red. Our timing was almost perfect.

On our second evening of the camping trip, we had driven over Carson Pass to Markleeville, shooting images of aspens in their fall colors. On the way back, we had just passed Hope Valley Resort when I noticed some downed aspens. I could see they were felled by a beaver because of the cut along the stumps. ;”Nothing unusual here,” I thought. Beavers used to be common in the Sierras. “But wait! This aspen tree lying on the ground still had leaves on it!”

I turned my truck around and made my way back to the spot along the road between Hope Valley Resort and Sorenson s, directly across the river from Kit Carson Campground. Sure enough, the aspen tree was on the ground along with many others, and there was evidence of the aspens being dragged into the water at various points. The river was slow, so I knew I would find a dam further down. As I walked along the bank, I could see the aspen trees in the water; leaves still attached and ready for the winter ahead. Someone had been very busy here. Soon we found the lodge. A large stick structure on the northern side of the river near the bank. It appeared to be six feet in diameter at the water line, and probably four or five feet tall. The dam was near the lodge. It spanned the width of the river at a place that was maybe twenty-five feet wide and was almost six feet tall, making a deep pool on the upstream side. It’s difficult to know just how much pressure was on the dam from the water upstream, but the structure was absolutely magnificent.

As we stood in the almost dark forest, the beaver surfaced from his plunge hole in the lodge and began to make his way upstream toward us. We stood very still as he approached. He swam to a point directly abeam us, then turned toward our position on the bank. As we watched, the beaver watched back, sniffing the air cautiously. Apparently deciding we were no threat, he turned and continued his way upstream, probably to continue the fall harvest of aspens, alders, and willows for the winter ahead.

The American Beaver is properly called Caster Canadensis. The name Castor loosely means, “to excel,” possibly because of the beaver’s energetic and relatively sophisticated life style. It’s been said that one measure of intelligence in a species is the animal’s ability to manipulate its environment.

Beavers live along streams and rivers in lodges built from sticks and mud, or in dens dug along the river bank. Stick lodges are usually between fifteen and twenty feet in diameter and from six to eight feet above the water. Inside, they contain a single chamber from eighteen to twenty four inches high and six to eight feet across. The chambers have one or more entrances that enter from underwater, and one vent hole for fresh air. Animals that live along river banks usually construct a tunnel from underwater; sometimes as long as 50 feet into the river bank and above the high water line. A single chamber is widened into a cavern two and one half to three feet across with ceilings ranging from eighteen to twenty four inches.

One early American explorer paid an unexpected visit to a beaver lodge in the 19th century. While being pursued by Blackfoot Indians along the Madison River, John Colter – one of the discoverers of Yellowstone -dove into the water and surfaced inside the entry hole of a beaver lodge. He waited there, cold and blue, until late that night when he made his escape under cover of darkness.

Much of North America was originally explored and settled because of the world’s hunger for beaver pelts. Trappers and hunters moved west as beaver populations depleted in the east until beavers were hunted nearly to extinction. In many areas they totally disappeared until reintroduction in the middle of this century.

Some people think beavers eat exclusively tree bark, but they actually spend most of the spring and summer eating a diet of aquatic vegetation including cattails, lily pads, and grasses. They also eat small amounts of aspen twigs. ;In the fall, the beaver begins cutting aspen, alder, beech, birch, and willow trees for the winter supply. These trees are gnawed into manageable sizes and dragged to the pond, where they are anchored to the bottom using rocks, or simply “sticking” them into the mud.

Beavers have not been without controversy. An average beaver family of six can consume an acre and a half of aspen trees per year. In cutting trees for food, they destroy habitat for deer, and their river damming activities sometimes cause a rise in water temperature, causing the stream to become uninhabitable for cold water fish. Important fish migration routes are sometimes interrupted by beaver dams. When living in areas populated by humans, beavers will sometimes dam drainage ditches and culverts and burrow into levees causing them to weaken. Their dams have flooded productive farm land, pastures, and roads.

In many other respects, the ecological effect a beaver has on its environment is considered beneficial. In building dams across streams and small rivers, the enlarged river acts as a natural fire break. The pond behind the dam increases in temperature, often causing more insects and crustaceans to flourish, causing local fish to grow bigger and more plentiful. Vegetation grows larger and in greater quantity. Bigger and more plentiful fish increase the local food supply for many animals, while an increase in vegetation creates more food and cover for other animals. Ducks and other water birds often assume full time residence at a beaver pond, while others like Canadian Snow Geese use it as a rest stop along their migration routes.

Beaver dams act as settling ponds where silt collects, eventually causing meadows to form in much the same fashion as lakes, and eventually meadows were formed behind terminal moraines during the ice ages.

In some western states, specifically Wyoming and Utah, beavers were considered so beneficial they were relocated from overpopulated areas into more remote areas using airplanes to parachute the animals to their new home. The beavers were placed in groups of four – two females and two males – into boxes that were designed to open when they landed. It’s not clear how successful this program was.

As with many different wildlife species in California, beavers are far more plentiful than most people know. They flourish in the San Joaquin Valley in nearly every major river, and populate most of the Sierra Nevada. I encourage anyone who wishes to see these incredible animals in the wild to visit the pond along the river in the Hope Valley. It’ll be worth your time.