Bats are unique in that they are our only true flying mammal. They are more closely related to primates than rodents. They are placed in the order Chiroptera which means “hand-wing”. This means that bats fly with their hands! A bats forearms and hands have been modified to provide flight. The fingers have become extremely elongated in order to form the “wing bones”. Unlike birds, a bats wing is not made out of feathers. It is a thin but tough covering of skin. Bats are also capable of flight due to their small size and light bones. If you have ever swam with the butterfly stroke, you know how a flying bat uses its wings. Bats use their wings to pull themselves through the air, the way a swimmer uses her arms to pull herself through the water.

There are over a thousand species of bats in the world with about 40 living in North America. They are found everywhere on the planet except where it is very dry or cold. Bats vary in their feeding styles and dietary preferences. Bats in North America are primarily insectivores and can consume vast amounts of insects nightly. Studies have shown that the little brown bat, one of North America’s most abundant species, is capable of capturing 600 mosquitoes in an hour. Though this may sound impressive for an individual bat, imagine what large colonies are capable of doing. One colony of 20 million Mexican Free-Tailed bats in central Texas can eat up to half a million pounds of insects a night. Bats are by far the most important predators of night flying insects. Many of these insects are agricultural pests, and others spread disease. Bats reduce our dependency on chemical pesticides and provide a natural means of controlling unwanted insects.

Bats are capable of detecting insects at night, through a process called echolocation. When echolocating, a bat sends out high frequency sounds through its mouth or nose. When prey is detected, the sounds bounce off the insect and return back toward the bat. The sounds are collected in special grooves in the ear and enable the bat to determine how clos and possibly how large the prey item is. Once the bat close in on its prey, it catches it with its mouth or scoops it up wit its tail membrane. Bats are opportunistic hunters and may forage for insects that are disturbed into flight by people walking through vegetation. With its sophisticated echolocation, a bat would have a hard time getting tangled i anyone’s hair. Some bats can detect prey that is no wider than a human hair! 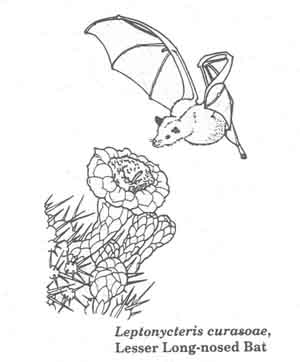 Long-nosed bats play a vital role in maintaining the ecosystems of the Sonoran Desert in the southwestern United States. They are nectivores or nectar eaters and have long tongues adapted to reach deep into flowers to get at the reward inside. Similar to the role hummingbirds play in the day, bats spread pollen from flower to flower during the night. Giant cacti and several species of agave (century plants) are dependent upon bats for pollination. The giant cacti provides food and shelter for many species of wildlife which are indirectly dependent on bats for their survival. Frugivore or fruit eating bats do not need to rely on echolocation to locate food. Flying foxes are considered the farmers of the tropical forests and without them rain forests across the world may perish without the bats pollination and seed dispersing abilities. By consuming fruit that is too ripe to ship to market, flying foxes reduce waste. They may also prevent the destruction of marketable fruit by insects attracted to a buildup of rotting fruit. In West Africa, bats carry 90 to 98% of the seeds of “pioneer plants” that initiate forest regrowth on cleared land and in the Pacific Islands bats are crucial to the survival of over 40% of the tree species. Many of these trees provide economical products including fruit and timber.

Some species of bats prefer eating scorpions, fish or frogs. However, the most famous bat can be attributed to the mere fact that it prefers to dine on blood. Perhaps Hollywood with its depiction of bats transforming into vampires has more to do with the perception of bats as evil and fearsome creatures than anything else. Of all the bats (over a thousand species), only three species are vampires. They are located in Latin America and only one species feeds primarily on the blood of large mammals. Vampire bats occurred within the forests of Latin America but as land was cleared for pasture and cattle were introduced in large numbers, the habitat of the vampire also changed. Displacement of its natural prey due to forest clearing forced the vampire to locate other prey items. Cattle were easy to locate as prey due to their location in open fields, slow movements and large size. As a result of an abundant prey source, vampire bats increased in number, causing concerns among local people.

Vampire hysteria in Latin America has resulted in eradication programs that not only eliminate vampire colonies but also other species of bats that co-habitat their roost sites. The destruction of beneficial bats will impact entire ecosystems and has affected cash crops in third world countries. The fear of rabies is a common reason for trying to eliminate vampires and other bats species primarily due to misinformation. Fewer than one half of one percent of bats contract rabies and when they do they die quickly. You are more likely to contract rabies from a dog than from a bat. However, bats continue to be the target of misinformation and have suffered great losses. Vampire bats do not kill their prey and even use an anticoagulant to prevent external loss of blood. The anticoagulant in vampire salvia is currently being used in research as a tool to improve open heart surgery in humans. Vampire bats are sociable animals, very clean and will even raise orphans and feed other adult vampire bats.

Bats are highly specialized making adaptations to habitat changes difficult. They usually produce only one young per year and often form large colonies which are easily destroyed. These traits leave bats extremely vulnerable to extinction. The bats that are declining the most are those that are dependent on caves or mines for roosting. Maternity and hibernaculum (overwintering) caves are the most critical to the survival of bats. Disturbance by cave explorers and researchers can cause young to dislodge from their mothers and perish on the cave floor. Disturbance of hibernating bats may cause the depletion of fat which is needed to survive until emergence in the spring. Mine closures also threaten many species of bats due to closure for public safety. The continuing search for gold and other valuable minerals also threaten bats as mines are being reopened for excavations.

Bats may hang from tree branch limbs, roost in tree cavities and under loose bark. Dead trees or snags are also vital to many species of bats. Cliff and boulder crevices as well as buildings will attract bats as long as they provide a suitable atmosphere to sleep or raise a family. If you have bat guests in your home, thank them! They have paid rent in securing your home from unwanted guests. Without them, mosquitoes and other pests may multiply, unchecked to feast on your family and garden. If you still can’t get used to being a landlord to one of the most beneficial creatures in the world, you may be able to entice them to occupy an alternate residence, though success may be limited. If you need to remove bats make sure there isn’t a maternity colony in your attic, otherwise you will leave young bats to die in your home. This will cause unnecessary suffering and possibly unwelcome smells in the heat of summer. Instead use netting to cover entrance and exit holes after you have ensured that all bats have left and there are no young bats inside. Be sure to also provide alternate housing that the bats can take over so that you don’t lose the benefits bats provide. Never use poisoning to eliminate bats from your home as it is illegal in some states and may cause secondary toxic effects to human occupants.