Mistletoe on pines you say? I thought mistletoe was that evergreen, parasitic plant that grows on oaks and other broadleaf trees. Very true, but there is also another mistletoe in California that grows on pines and several other conifers. It’s name is Arceuthobium, or more commonly “dwarf mistletoe”.

The dwarf mistletoe are world-wide in distribution and inhabit many of the temperate, coniferous forests, but they reach their peak’ of biological diversity in conifers in western North America. Every genus of conifers in the family pinaceae is parasitized by one or more species of dwarf mistletoe. They range from Alaska to as far south as Guatemala, and can be found in conifers growing at sea level to those growing at the highest elevations in the alpine forests. California alone is home to more than a dozen species of dwarf mistletoe, and at least seven of them can be found on the Eldorado National Forest.

Dwarf mistletoe are much smaller and less conspicuous than their larger leafy cousins on hardwoods. They do not produce leaves, but consist of small segmented aerial shoots that function almost entirely for reproduction, and a rootlike system that grows within the branch. Separate male and female plants are produced, but they are difficult to tell apart because the flowers are very small and indistinct. Only when fruit is produced is the female plant easily distinguished from the male plant. The fruits appear as tiny footballs on short stalks, and contain one seed which is explosively discharged like a miniature missile when ripe. (Mistletoe did not acquire it’s name from this method of the seed dispersal). 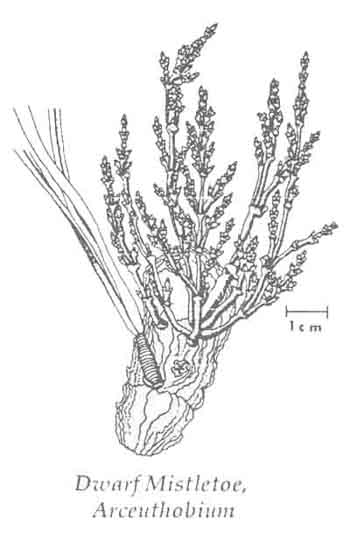 The seeds are covered with a sticky (viscin) coating and can travel at least 20-30 feet following dispersal. From the tops of large trees, discharged seeds can be carried by wind and travel 100 feet or more to surrounding hosts. The sticky seeds adhere to conifer needles until they are wet by fall rains, at which time they slide to a branch where germination and infection take place. Depending on the mistletoe species, at least three years or more are required for the root system to grow in the host and produce visible signs of the parasite.

Dwarf mistletoe are more than just biological curiosities. They are extremely damaging pathogens of coniferous trees. Trees heavily infected with dwarf mistletoe are drained of nutrients and energy, reduced in growth rate, badly deformed, fail to reproduce well, and often are predisposed to further damage and death from other stresses such as drought, insect attack, and root diseases. Once established, the parasite cannot be killed without removing the infected branch or killing the host. Parasitic growth continues indefinitely, though usually slowly, until the branch or tree dies.

One way in which the mistletoe accumulates nutrients and weakens the tree is through the development of “witch brooms”. Witch brooms are deformed branches that contain many more small twigs and shoots than normal branches. An imbalance of hormones produced by the tree stimulates this multiple branch formation and diverts energy and nutrients to the parasitized branch. Often these broomed branches become very large. Trees with several large brooms are severely weakened. Large swellings also develop in some trees when the parasite grows from an infected branch into the trunk. Insects and decay fungi often invade these swellings and predispose the tree to breakage during windstorms or heavy snow pack.

If dwarf mistletoe are such damaging parasites in conifer forests, what are management agencies doing about them? Fortunately, there are several methods that can be used to reduce dwarf mistletoe populations to acceptable levels. Because most dwarf mistletoe are host-specific (that is they can grow only on one or two conifer species) we can regenerate or favor the growth of non-host trees in a conifer forest. For example, in the mixed conifer stands on the western slope of the Sierra Nevada, if pines are infected we can favor the survival and growth of true firs, incense cedar, and Douglas-fir. Or if true firs are infected we can favor the growth of the pines and other conifer species. Another method of reducing the damage from dwarf mistletoe in the future forests is to remove larger infected trees and then thin the surrounding understory, leaving only uninfected hosts or non-host trees. In high-use areas like campgrounds, pruning off the large, older infected branches increases tree growth and longevity.

Resistance to disease is an efficient pest management tool. Research and testing are currently in progress on the forest to develop mistletoe resistant ponderosa pines. Other conifer species show promise for developing resistance as well.

Even though these small, mostly unseen parasites cause enormous losses in California forests, managers are applying methods to keep them in check. In an attempt to further reduce losses to our valuable forest resources, research and testing continues.

Would You Like to Know More About Forest Health? A forest health monitoring program exists for the National Forest. It provides national and regional estimates of forest ecosystem health.